When we started planning a visit and project in Detroit earlier this year, we had only a few rough ideas of what to expect—and we ended up with every expectation challenged. We went to help, and ended up learning more than teaching. We want to keep working with our new friends and collaborators there, and we are continuing to discuss how and when to do this.

One of the people we met through the Innovators Guild Detroit project was Shaka Senghor. I won't go into his bio here, but if you Google him you'll see that his story is an amazing and inspiring one. He's also an awesome writer, and has written up some of his thoughts and impressions about the IG Detroit event. We wanted to share them with you so you could get a sense of what a non-Media Lab participant felt about the project. I look forward to your comments. —Joi

We looked more like a rock band than a band of innovators as we hustled into the large shiny black SUV. White, black, Asian, short, tall, casually dressed, it was all there–the only things missing were guitars, amps, a bass, and a dope lead vocalist. But we were no band–in fact we had yet to band together around the task at hand–and in essence this ﬁrst ride through the gritty streets of Detroit would be our feeling-out period. We were getting to know each other against the backdrop of a city that had been labeled the rust belt capital or murder capital of the world depending on who was telling the story.

I felt a great deal of responsibility as an ambassador of Detroit. I knew that I had to show the complexities of Detroit if we were to succeed in our efforts as innovators. I didn’t want anyone to come away from IG Detroit with an unrealistic, romanticized idea of the challenges we face. As we made our way down Grand River Avenue, the stark contrast of poverty-entrenched communities that were only a few blocks away from wealthy enclaves was evident. By highlighting these contradictions I felt that the team members would be better equipped to understand how to approach the design challenges.

We drove block after burned out block and I watched the varied expressions of my passengers through the rear-view mirror. They ranged from disbelief and sadness, to intrigue and hopefulness. In my own eyes I saw a tinge of embarrassment for our city, for the people who call Detroit home, including myself. For the ﬁrst time in a long time I looked at Detroit objectively, and it was painful to digest what was happening to my beloved city. However the pain was soothed by thoughts of what was underway.

As we traveled around Detroit, I felt compelled to give a voice to the societal fractures all around us, but where was I to begin? How could I sum up the tearing asunder of a city that at one time was a place of pride and joy? There was no easy answer and the gravity of it bore down on me. So instead, I simply said there is so much hope and potential here, and it was these simple words that set the tone for what I hoped IG Detroit would mean for that weekend. Though we had yet to sit down in our work space, I could see the wheels of innovation starting to spin.

Personally, this was one of the most exciting and rewarding experiences I have had. Being able to work with such humble, giving, thoughtful, and highly motivated people turned out to be the highlight of my weekend. The synergy of urban dwellers, tech geeks, authors, clothing designers, and design innovators proved my long-held belief that you see the best of humanity when artificial barriers are replaced by real-life experiences. The creative energy and inspiring spirits were contagious and brought our projects full circle. Over the course of what turned out to be a four-day weekend we tackled the following challenges:

We worked in small groups dispersed throughout OmniCorp, located in the heart of Detroit’s Eastern Market. Each group had its own space to iterate on ideas that were shared at the inception of IG Detroit, but we all checked in on each other from time to time. We genuinely enjoyed each other’s company and had a blast each night when we wound down from our work day. 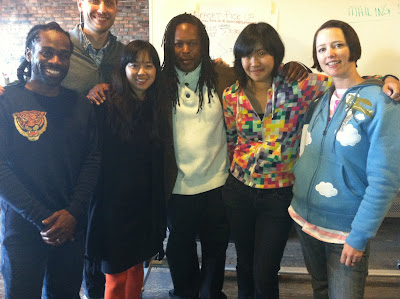 When it was time to conclude our weekend and share our projects I had mixed feelings. On the one hand, I was very excited to see what innovations the other teams came up with, but on the other hand, I was a bit saddened that our weekend was coming to an end. I had made friends with people who I believe will be a part of my life for years to come. I had laughed and joked with designer Christopher Bevans and shared soul food with Haiyan Zhang and Erhardt Graeff. In addition to innovating we were creating a human experience that will have a lasting impact for years to come.

After we presented in front of the other groups and people from different areas of Detroit, I took time to talk to those in attendance to get a feel for what they thought. From what I gathered from talking with people who showed up on the ﬁnal day, there is a great deal of hope and optimism about the future of IG Detroit. I could even sense from those who were cynical in the beginning that they were impressed by what we were able to accomplish in a relatively short amount of time. They were excited by our work and showed interest in working with us moving forward. It was a good sign that we are on the right path and I am looking forward to the next phase of IG Detroit.

Shaka Senghor is a community activist and writer based in Detroit, Michigan. He is the recipient of the Knight Foundation's BME Leadership Award. Follow him on Twitter: @ShakaSenghor

IG Detroit was supported by a grant from Knight Foundation.

Posted by Stacie Slotnick at 3:19 PM