The Media Lab through Your Lens: Enter Our Photo Contest and Meet Joi Ito!

The Media Lab’s reach spans the entire globe thanks to our professors, students, alumni, and spin-off companies. We’re always excited to see our researchers developing technologies that promise to fundamentally transform our most basic notions of human capabilities. To celebrate the many projects that come out of the Media Lab, we present The Media Lab through Your Lens photo contest.

So what are you waiting for? Grab your camera, smartphone, or tablet and start sending us photos! You can check out our Facebook and Pinterest pages periodically throughout the contest to see a collection of the photos submitted.

We can’t wait to see the Media Lab through your eyes!

*All photos submitted for the contest become property of the Media Lab and as such can be distributed via Media Lab web pages and social channels. The MIT Media Lab has the right to disqualify any entrants submitting pictures that do not meet the guidelines or are stolen property.

Technology and the Track 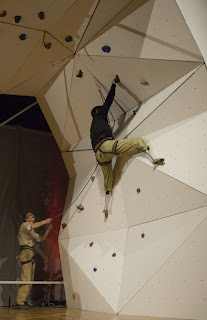 South African sprinter Oscar Pistorius just made history as the first double amputee to participate in the Olympic games, and the first amputee to take part in track events. Born without fibulae, Pistorius had his legs amputated below the knee before he was a year old.

Hugh Herr is an associate professor at the MIT Media Lab. An avid mountain climber, as a teenager he was caught in a blizzard while climbing in New Hampshire. After spending three nights outside in below-zero temperatures, he suffered severe frostbite and had to have both legs amputated below the knees. Not only did he walk again, he began climbing again using self-designed prostheses. [At left, Herr on the climbing wall at the Lab's h20 event. Photo: Webb Chappell]

Herr was an expert witness in the court case that resulted in the reversal of the ban preventing Oscar Pistorius from competing in the Olympics. We asked him a few questions about the science behind how Oscar runs.

What kinds of challenges does Oscar Pistorius have to overcome when racing with prosthetic legs?

Hugh Herr (HH): Oscar faces three dominant problems when racing with the Cheetah prosthesis. First, the Cheetah springs are passive, and therefore do not change stiffness during a running step. Consequently, Oscar's vertical ground forces are compromised, negatively impacting his running speed—that is, he can't push off the ground as hard, which reduces how fast he can run.

Second, Oscar's passive prostheses only return the energy that Oscar puts into them, actually less energy due to hysteresis. In contrast, the human ankle-foot complex is muscle powered and thus can propel a runner forward out of the running blocks during the acceleration phase of a race. Although the acceleration phase of the race has never been studied, it's likely that Oscar suffers from a lack of ankle power during this period of the race.

Finally, Oscar's prostheses are attached to his residual limb using a prosthetic socket that can often be uncomfortable and unstable. When Oscar sweats, his biological leg would become attached less securely to the artificial leg, possibly causing a degradation of performance.

How are ‘Cheetah blades’ different from other types of prosthetics? How do they work?

HH: The Cheetah prosthesis is designed specifically for running, and not for other activities such as walking. The Cheetah is shaped like a 'C' and is made from carbon composite, a highly elastic material for storing and releasing spring energy.

Do you think we’ll see other athletes like Oscar competing in the Olympic Games moving forward?

HH: Other persons with leg amputations may qualify for the Olympic games in the future, but it may be a very long time before another athlete is capable of qualifying. Oscar is a gifted and tenacious athlete. What other kinds of prosthetics are being developed at the Media Lab? 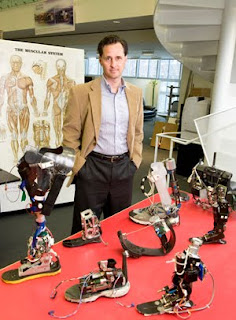 HH: The Media Lab's Biomechatronics group designs computer-controlled bionic limbs for walking and running. A recent invention is a powered ankle-foot bionic limb that has been shown to normalize the biomechanics and energetics of walking. [At left, Herr with a variety of prototyped prosthetics. Photo: Webb Chappell]

Much of the discussion about educational technology these days focuses on new ways to deliver instruction, through online videos and online courses. In our Lifelong Kindergarten research group at the Media Lab, we have a very different approach to education and learning, developing technologies not to deliver instruction but to open opportunities for people to create, collaborate, experiment, and express themselves. With our Scratch programming software, for example, young people can create their own interactive stories, games, animations, and simulations, then share their creations with one another online. In the process, young people learn to think creatively, reason systematically, and work collaboratively – essential skills in today’s society.

Last week, we had an opportunity to see how this learning approach is taking root in different parts of the world, as we hosted our third Scratch@MIT conference. More than 400 educators, researchers, and developers from 31 countries came to the Media Lab for four days to share stories, plans, and visions about Scratch. 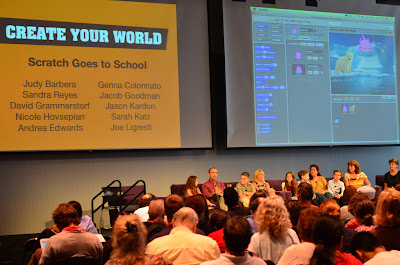 One unifying theme at the conference was the use of Scratch to encourage and support many different types of connections:

Although the Scratch@MIT conference happens only once every two years, our research group is always working to nurture, sustain, and extend all of these connections. The ScratchEd website enables educators around the world to share stories, exchange resources, and connect with one another. And later this year, our group will launch a new generation of Scratch, called Scratch 2.0, that will enable people to create projects directly in the web browser, opening new opportunities for creativity and collaboration with Scratch. 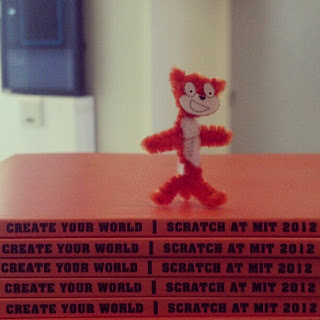 Mitch Resnick is Professor of Learning Research and Director of the Lifelong Kindergarten research group at the MIT Media Lab.

Karen Brennan, a PhD student in the Lifelong Kindergarten group, chaired the organizing committee for the Scratch@MIT conference.
Posted by mres at 11:57 AM 0 comments