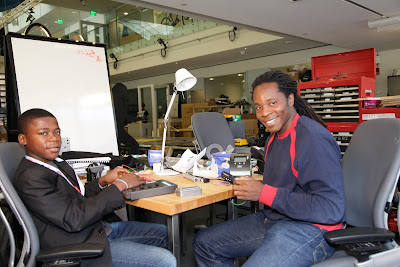 At the Media Lab, PhD candidate David Sengeh is helping to change the world by developing next-generation smart prostheses. But this self-professed technology geek is also making an impact halfway around the world in his native Sierra Leone, where he’s launched Innovate Salone, a national high-school innovation challenge. Innovate Salone is funded by Global Minimum Inc.. “The idea,” says David, “is to encourage the country’s students to use their own ingenuity to solve some of their country’s most challenging problems–to lay the bedrock for national development.” The focus is on issues related to health, energy, education, agriculture, transportation, telecommunications, civic media, and engineering.

Read what David says about the project on CNN. [Update: here's another article, with a great video of David and Kelvin working at the Media Lab.] Interested in becoming a sponsors or donor? Send email to info@gmin.org.

Posted by Stacie Slotnick at 12:36 PM