Q&A with Henry Lieberman about Cyberbullying

Last week The Atlantic published “How to Stop the Bullies,” a piece about the epidemic of bullying online and the response to this growing problem from social media site administrators, educators, researchers, and public groups such as Anonymous. Henry Lieberman, principal research scientist at the MIT Media Lab, was featured in the piece in a lengthy discussion of the work he and his grad students Karthik Dinakar and Birago Jones have done with cyberbullying.

As explained in this video from NowThisNews, Lieberman and his team hope to use the algorithm they’ve developed to prevent instances of cyberbullying by giving users a warning about their language and an enforced pause before posting potentially harmful content.

The article and the video provoked a flurry of response on Facebook and Twitter, with many asking for more details about the work. Here are his responses to the questions asked most often.

What was your motivation for working to combat bullies when you first began this work?

The project was started by my students Karthik Dinakar and Birago Jones, who were deeply moved by press reports of teens committing suicide and other heartbreaking stories. They saw an opportunity for natural language understanding and user interface design to help, and nobody in the academic community at the time was working on how to improve social network software to deal with the problem.

How can we make the connection that cyberbullying affects students in school? (Sometimes children think it is separate from school and this gives them the freedom to say what they "want" to say.)

Studies show that cyberbullying results in poorer performance in school for bullying victims, and surprisingly, for the bullies, too. We want to respect people’s freedom to say what they want, but kids should understand that if what you say hurts others, then it’s not cool, even if you “have the right to say it.”

From my understanding, some web accounts cannot be set up until a certain age. How are children able to open accounts? Are there ways to hold those who provide services responsible?

Some networks do have a minimum age limit, but kids get around it by using false identities. Some sites do insist on a credit card or other proof of adulthood or adult approval. No enforcement is perfect. But if kids do manage to join a network meant for older people, then they have to be held to adult standards of responsible behavior. 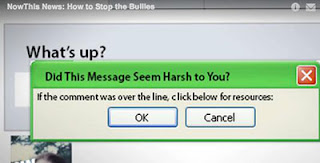 Dr. L, what is the thinking process that's disrupted by the prompt to "reflect" before sending a mean message? Does the prompt have the potential to promote impulse control in general?

Many times, bullying behavior starts out as users trying to be funny. Some users, innocently, try to be funny and wind up saying hurtful things. This is usually easy to fix, as a little bit of reflection will often cause the person to realize why it might be hurtful, and it’s easy for people to forgive others who didn’t intend harm. People who actually have an intent to hurt are more difficult to stop with a warning. Even there, though, reflection can sometimes convince them that hurtful comments would damage their own reputation or open themselves up to negative consequences.

For the good doc: It seems like an assumption in this tech is that bullies act on impulse. Giving them pause to double check that they really want to send something is certainly a way to curb that impulse, but every bully I've ever met (or e-met) is usually on a rampage for at least a half hour or so. What research has your team done to suggest that an in-the-moment response to an in-the-moment problem is actually effective? Have you experimented with "holding" offensive posts for different periods of time?

That would be a good experiment to try, but we haven’t yet done it. Anecdotally, we find that when bullying is recognized and “called out,” in the majority of cases, people tend to back off. I agree that this won’t stop a really hard-core bully.

Your software invites comparison to spam filters, which also employ algorithms to separate certain kinds of web content from others. How sound is that analogy? How is it different?

Gmail can do such a good job with spam because it “crowdsources” the judgment of whether the message is spam. Spam is sent nearly identically to large numbers of people. It also has telltale words that can be identified. Bullying is more personalized and context-dependent. Sometimes bullying takes the form of racial, ethnic, or appearance stereotypes, and you need the knowledge of what those stereotypes are (without endorsing them) in order to recognize that it's taking place. So it is a challenging problem for us. But, like spam, it is a make-or-break issue for social networks.

Isn't bullying an inherent part of our make-up? I have no scientific sources to back up my statement but I believe it's something that will always be around, like thieves and liars.

That’s a misconception I’d like to strongly refute. Many people don’t bully and don’t experience it, so no, it’s not inevitable. Studies show that for both bullies and victims, negative effects such as doing worse in school, worse health outcomes, and rates of criminality are higher than those who have no involvement. See Emily Bazelon’s book, Sticks and Stones and the MTV/Associated Press survey on bullying. In 2011, we went to the White House Conference on Bullying Prevention, where President Obama said, “If there’s one goal of this conference, it’s to dispel the myth that bullying is just a harmless rite of passage or an inevitable part of growing up. It’s not.”

We don’t know exactly when. We would like to collaborate with these companies to work on this. Some of our software is currently on MTV’s site “Over the Line?”, where it matches a user's story to other stories on the site that talk about similar experiences. Reading a story that matches your own personal experience can provide emotional support, and perhaps even useful advice about the situation.

Thank you to everyone who submitted questions!

Posted by Stacie Slotnick at 4:00 PM